The overall development of the business until 30 JUNE 2015:
the updating operation of data sheets economic operators active in various sectors of trade, allowed to be completed during the first half of the year 2013 at a total estimated number of traders: 30201 traders with a rate an increase of 3.5% compared to the number of traders from the previous year, most of them engaged in activities related to the sectors of retail and services (respectively 13 233 and 11 325 merchants), producers have been identified this year: 3956 with a rate of 13.1% of the total number of economic operators, most of which are engaged in activities related to the field of construction and public works, while traders numbers recorded in the sectors import (p.morale) and the wholesale trade, are, respectively, 719 and 857.

The table below clearly shows the distribution of main registrations (traders) by business and the legal nature until June 30, 2015 :

The distribution of assets by business traders at June 30, 2015:

The graphic representation of the distribution of assets by business traders at June 30, 2015: 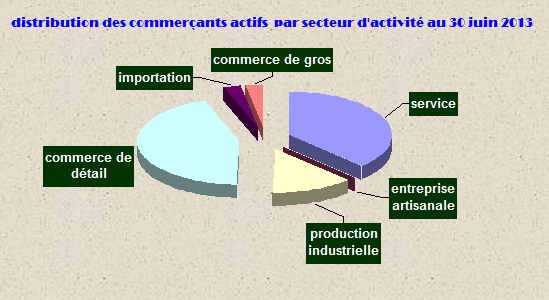